Another long requested feature we now support! You can now directly open a file from your local computer instead of being forced to upload it to your cloud drive!

To do so, simply go to the File Picker > Your Files and in the left hand panel, click on 'Your Computer': 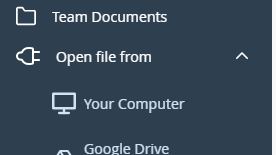 This will open a dialog from where you can now select your file. We support:
.xar
.web
.pptx
.docx
.pdf

After opening, your file will be converted to a .xar project file so it can be edited, but don't worry, you can export the file again to the originally saved format or even to another format (such as docx to pdf).

Similar to the above, we now include the option to directly open images and graphics from either your connected cloud drive or from your PC.

We now support list styles! This allows you to apply and save a style to a list and the list sub levels for use throughout your document.