Written by Aaron S
Updated over a week ago

Most PDF files include a definition of all the fonts that are used by the text in the PDF (embedded fonts), so they can be displayed accurately by any PDF Viewer. So when opening a PDF, Xara Cloud is now able to import these fonts too. Previously, Xara Cloud would often use a similar font instead. Now Xara Cloud will always use the fonts from the PDF (if they are embedded), so all text should always appear exactly as the document author intended, on any device. You can recognize those fonts, since they all have a PDF- prefix on their names, so you can easily distinguish them from regular Xara Cloud fonts. 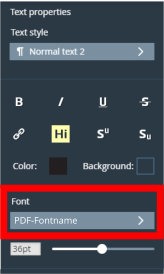 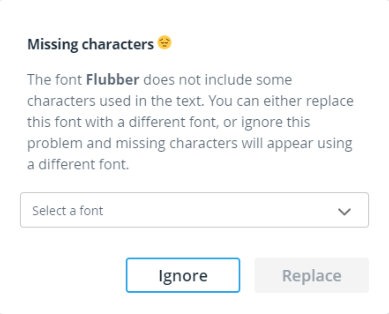 When selecting 'Ignore', you will not be warned again about missing characters for that particular font, in the current editing session.

In this release we’ve improved the display of CMYK colors on screen, and also in all export formats that require conversion of CMYK colors to RGB. These color conversions now use a standard state-of-the-art Color Profile.

Vizzlo Improvement - Back to Xara Cloud

Together with our partner Vizzlo (our data visualization integration), we have improved the workflow to achieve faster results.

Now you can see a button in the Vizzlo editor, which only takes 1-click to get right back to your Xara Cloud document.

Other Fixes and Improvements